“Best played co-operatively.” It’s something that’s fairly obvious for some games: Left 4 Dead, Payday 2, Killing Floor, the works. These are the kind of games that are built from the ground up to be played co-op with friends or random players, but can also be played by yourself if you want to. To me, the term also applies to games that have a single player campaign, but is infinitely more fun with a few friends. Like Sven Co-op is for Half-Life. That describes Serious Sam, the chaotic shooter series, to a T. 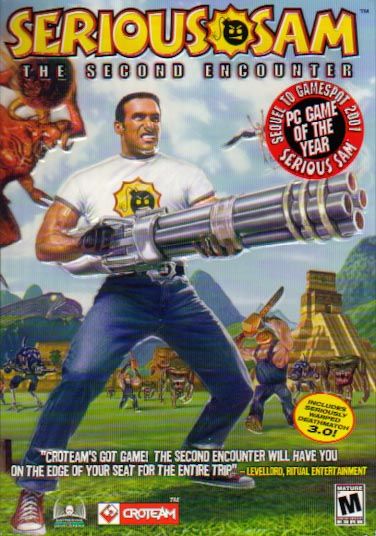 My friend Cambertian (@cambert123 on Twitter) had requested I played one of the classics, Serious Sam: The Second Encounter, and sure enough, it was the first game where I abandoned the early “wheel” picking system in lieu of a more simpler “Request a game, put it in the queue” system. I had played Serious Sam games in the past, co-oping through The First Encounter HD, Serious Sam 2 and even Serious Sam 3: BFE with a few friends. I had tried to play through the classic games before thanks to the HD remasters, but I never got very far.

Even for a 15-year-old game, it still looks pretty.

The Second Encounter is basically an expansion pack to 2001’s The First Encounter. It adds a few new enemies to its bestiary such as a pumpkinhead looking monsterwith a chainsaw, an Reptiloid Demon that throws homing fireballs, and even alien monsters of the simpler headless foes of First Encounter. There’s a few new weapons in addition to the common arsenal of shotguns, miniguns and rocket launchers, including the sniper rifle – a valuable weapon against middle tier enemies – and the Serious Bomb, the game’s answer to the BFG. There’s a few new locales like the jungle, some temples, even a snowy land, each area defining a certain episode of the game.

A common sight in Serious Sam: Lots and lots of enemies.

Serious Sam is part of a genre I’d call “slaughter FPSes,” as they relate to the Doom community’s “slaughter map” design of straightforward levels and lots and lots of tra enemies to kill. Lots of rooms in The Second Encounter throw loads of enemies in fairly open spaces, which isn’t particularly hard. Until I got partway through the second episode, where Croteam loved putting loads of Kleers – the skeleton monsters – in very cramped corridors, making it difficult to push through without getting stuck and repeatedly hit. I ended up using the flamethrower a lot in that section as it killed them pretty fast.

END_OF_DOCUMENT_TOKEN_TO_BE_REPLACED

The internet is a fascinating thing. Sometimes you find things because of the internet. In my case, I stumbled upon this game thanks to the internet.

Christopher Brookmyre’s Bedlam: The Game is a game based on a novel by Christopher Brookmyre (natch), a noted British author, whom sadly I’m not aware of since I’m a “bloody yank.” (I live in the United States.) I was made aware of this game thanks to Achievement Hunter-turned-Twitch-streamer Ray, aka “BrownMan” on Twitch. He was doing a blind run of this on Xbox One, and it looked like a game I’d give a try just on the idea.

This is also the third (and so far, final) game I requested myself, just to build a queue of games to play for BST. Ultimate Doom needed no introduction, Turok was something I wanted to try to see if nostalgia held up. Bedlam, on the other hand was clearly the offshoot of wanting to play something fairly unknown as it were. It’s also the most recent game I’ve played so far, coming out in 2015. (The Turok remaster came out that year as well, but the original game came out twenty years prior so that doesn’t really count.)

The story involves Heather Quinn, as she signs up for some new virtual reality machine to simulate video games. Little did she know, she was sucked into the world of video games instead. With the help of various people she meets in the game worlds, she must go through the worlds of various video games and find her way out.

When I started playing, I was thrusted into a game world not unlike Quake II. Though it goes by a generic name – Starfire – it clearly has the style and look of that mid-’90s era of PC gaming. This is what Bedlam does throughout. Through my travels as Quinn, I went through a WWII FPS world, a futuristic open arena like Halo or PlanetSide, a medieval area similar to games like The Elder Scrolls V: Skyrim, even clones of Pac-Man and other old-school arcade games.

Yet, oddly, the game also name drops notable locations like Black Mesa (from Half-Life), and even mentions Call of Duty, despite all the games depicted in-game being fictional. Presumably it’s okay to reference them without having to pay legal fees; but this might all be referenced in the book the game’s based on, I haven’t read it to be sure.

END_OF_DOCUMENT_TOKEN_TO_BE_REPLACED

So, now with the dreadful 007: Nightfire put out of its misery, the next game that came up on the Decision Wheel (name not final) was Turok: Dinosaur Hunter. This was one chosen by me because I wanted to pad the Wheel with options until there were enough people requesting stuff that it wasn’t necessary. I also was itching to try this game for a while, so now felt like a good time as any.

The version I played is the recent remaster on Steam, co-developed and published by Nightdive Studios. Nightdive’s been hard at work re-releasing older DOS and Windows 95-era games and making them work in modern machines (or at least putting a DOSBox wrapper with it). Most notably is reviving the long-dormant System Shock franchise, and even trying their best to bring No One Lives Forever back from the dead, among other notable revivals. Naturally it makes sense to bring back Turok.

The Turok game franchise is mostly known as a console series, where the main games were on Nintendo 64. However, the first Turok as well as its sequel Seeds of Evil did get PC releases, but rather than reverse engineer the game to work on modern machines like System Shock 2 or Aliens vs. Predator Classic 2000, the game’s assets — models, maps, sounds, and music — were ported to a proprietary engine known as the “KEX” engine. The engine is the same engine that handled the Doom 64 source port known as Doom 64 EX and even stuff like Powerslave EX. Basically this game is a mix of old and new: It’s like the console game, but not an exact port of the PC game. This might piss off some purists, but not me.

END_OF_DOCUMENT_TOKEN_TO_BE_REPLACED

I’m gonna be doing recaps and info dumps of Budget Shooter Theater streams alongside regular blog posts for those who wish to keep up. Mainly so I can keep tabs on things, and have records for everything.

You’re probably thinking, “Oh! I remember that game! That game was amazing!”. Yeah, it was amazing. On a Gamecube, a PS2, even an Xbox. But that’s not the version I was playing on stream. I was playing the less-than-stellar PC version, released around the same time and developed by Gearbox Software.

Back in 2002, Gearbox Software was contracted by EA to make a PC game loosely based on 007: Nightfire. At this time, Gearbox was still a plucky fresh-faced developer, piggybacking on Valve’s Half-Life games. It wasn’t until 2005’s Brothers In Arms: Road to Hill 30 did they actually get to make something entirely original that wasn’t based on an existing license or a port of something like Halo: Combat Evolved.

Loosely inspired by the 1979 Bond film Moonraker, the plot involves Bond (portrayed by but not voiced by then-current Bond actor Pierce Brosnan) investigating the plot of a philoanthropist who supposedly decommissions silos, when in reality he’s using them to store missiles and use it for Operation Nightfire, which would destroy the whole world. It’s a typical Bond story for the era. Not full of pastiches like 2001’s Agent Under Fire, but certainly not the more “serious” Bond that Daniel Craig brought to the role in 2006.

I don’t know where I read this, but I heard apparently Gearbox wanted to make a Bond game based on You Only Live Twice, but was told to make this instead. The only other things of note is the story written by Danny Bilson, the man who would later sink THQ thanks to the trainwreck that was Homefront, and one of the mappers for the game was Marc Schroeder, who worked on the Poke646 Half-Life mod as well as maps for the aborted version of Counter-Strike: Condition Zero that Gearbox was working on.

Other than that, it’s a pretty mediocre Bond game. Not the best, but certainly not as awful as, oh say, Goldeneye: Rogue Agent. Clearly the console version is the superior product here.

END_OF_DOCUMENT_TOKEN_TO_BE_REPLACED

For about a year or so, I had this idea: Play fairly cheap first-person shooters, third-person shooters and lightgun games that were $20 $30 US or less. I struggled to figure out how I wanted to present this. It was almost a podcast, it was fairly close to being an edited video series a-la a few video series I’ve seen online.

But sometimes the simpler options are the best. I opted to use my (at the time) dormant Twitch channel and just play along for the internet. It’s a slight homage to similar “beat ALL the games” projects like NESMania, PSXsplosion and others.

As I’ve said before: I’m a writer, not a graphic designer. 😛

Unlike those, this is practically a never-ending quest as there are lots and lots and lots of trai- er, shooter games out there to mess around with. But that’s fine, because this is more of a series of the interesting, the unusual, the good *and* the bad of the “shoot dudes in the face” genre. I’m okay with it not having an end goal except when I feel it’s done.

For the inaugural episode, I decided to go play through the 1993 classic, The Ultimate Doom. My friend Bobinator of HG101 fame tagged along as my co-commentator as I blasted through all four episodes in about three hours with various mods to spice things up. Coincidentally I played this on Doom‘s 23rd anniversary. You can watch it below:

Click here for the whole Budget Shooter Theater playlist of games I’ve played. It’s an interesting mix of the classics and obscura.

After I finish a game, I write a recap and review of sorts on how I felt about it. You can check out what I’ve played and written about here.

If you wanna watch this series, you can follow me on Twitch at twitch.tv/tonicbh. Leave a comment on here or in the usual social media circles (Twitter, the Facebook group) if there’s a game you wanna see me play on a future stream.

(EDIT 7/3/2017: Updated it so it’s a bit more current, with newer links. I will make a separate post for The Ultimate Doom instead of using this recap post. Stay tuned!)