For a brief while, I wrote about me getting stuff in Loot Crate and such. This is basically covering that.

About three years ago, I had won a free year of Loot Crate through reasons I don’t really remember these days. For the first couple of months, I started writing about them as part of “The Crate Chronicles,” documenting these goofy little things. They stopped in early 2016 because I lost interest. Among other things.

The biggest problem I had – and this is not the fault of Loot Crate – is that these were often for things I had no interest in. The Avengers. Star Wars. The Walking Dead. All those TV shows and movies that are “the in-thing” at the moment. I’m so out of touch when it comes to that stuff that I can’t even feign interest. When it had something video game related, however, I was a bit more hyped.

I ended up getting the full year and let it lapse, because the monthly costs for junk I don’t really need wasn’t worth it, for the reasons mentioned above. By then, I think they expanded to other crate types, including one that was specifically about video games. But again, cost. On the bright side, at least I didn’t get a loot crate with an inflatable crown in it.

All the Loot Crates eventually got stored away, along with a bunch of other things. But one thing made the rounds on social media lately that made me think “Hey, wait, didn’t I get that item in a Loot Crate once?” And sure enough, I did. We’re gonna talk about it, as well as the other things in there. Strap in, as I cover May 2016’s Loot Crate. Three years (and a month) to the day.

Hulk SMASH… this thing, whatever it is

Oh hey, a figurine based on that big green dude who punches things. Made to advertise Avengers: Age of Ultron, it’s a nice, stylized figurine of The Incredible Hulk doing his patented Hulk Smash on some poor building. The style is a bit more cartoonish than the film it’s based on, which is a good choice.

I don’t have much else to say about this one. It’s a neat figurine, but I have no space in my house for something like this. At least it’s not a Funko Pop.

I wonder why hes wrapped around that thing…

You can add Dragon Ball Z to the list of “things I haven’t watched.” Well, maybe I watched it when I was a teenager on Toonami or something, my memory’s foggy on that front. Was that the version that had the “Rock the Dragon” theme song? I forget.

Anyway, it’s Shenron, that dragon dude wrapped around a dragon ball. Like in the intro and a handful of episodes. It’s nice and squishy. It even has a hook to place on your bag or on an actual keychain. It looks pretty neat, and I’m not even a fan of the series.

Now that I think about it, maybe I should’ve listened to All Systems Goku. That could’ve gotten me interested in this silly Dragon Ball stuff. It’s certainly better than what I watch these days.

END_OF_DOCUMENT_TOKEN_TO_BE_REPLACED

Invaded by the January 2016 Loot Crate.

Hey, guess how long it’s been since we last had an article about some stuff I got in a box? Precisely one month! And guess what showed up on my doorstep?

Yep, still a black box. Not much else to say, here.

Yep, it’s another one of them Loot Crates! To kick off 2016, the theme they went for is “Invasion,” which means this will likely be full of sci-fi and other assorted goodies. They also seemed to change the shape of the crate again from last month. It makes it more difficult to keep them neat and even with all these inconsistent sizes every month, but as long as they can stack, I’m not bothered.

“Leeloo” is such a dumb name, my god

This is a replica of the ID card from The Fifth Element, complete with a fake ID for Milla Jovovich’s character Leeloo. I’m honestly amazed that name went through without lots of checking, because that sounds less like an important character and more of a bit I’d see in Kung Pow: Enter the Fist. Despite that, this replica item is a nice treat for fans of the movie.

Admittedly, The Fifth Element is another one of those movies I’ve never seen. Maybe it was because it was critically panned upon release, but also because most sci-fi doesn’t do much for me unless it involves time travel. I’ll throw The Fifth Element on the “to watch someday” pile…

END_OF_DOCUMENT_TOKEN_TO_BE_REPLACED

Exploring the galaxy with the December 2015 Loot Crate.

It’s been a month, so it’s time for Loot Crate to come my way once again. I already wrote about last month’s Loot Crate, and I thought that I might as well write about them as I got them. Since Loot Crate is probably one of the more popular things in terms of nerd culture, this is more of a personal archive for myself, since most of the stuff inside is already well known on the web.

I almost didn’t get this crate, as I found it in the trash. My dad had accidentally threw it in there, thinking it was just an ordinary package. Thankfully there was no signs of damage or smells on the box, so I was able to recover it before it would’ve suffered an untimely demise. So let’s tackle this month’s Loot Crate, of which the theme is “Galaxy”.

I mean, these look so generic-looking that I’m not surprised that it was almost in the trash.

Oddly, the box is in a different, more box-like shape this month compared to last month’s, I wonder why that is. After cracking the Loot Crate open, I start to find out why…

But I thought we already finished the fight…

Hey, it’s a box within a box! Xzibit would be proud. More specifically, it’s a box shaped like an ammo crate that features the logo of the UNSC, the main military group of the Halo franchise.

My experiences with Halo involve playing a leaked beta build of the PC port many a year ago, and co-oping through Halo 3 with a friend, which had a rather interesting tale that might be a bit much for this kind of blog. Since I was mostly a PC gamer by the time Halo hit the scene, I never really found much interest in the franchise. It wasn’t terrible, but I never got sucked into the cultural zeitgeist of it all. A shame really.

There’s also a code for some unlockable items for the then recently-released Halo 5: Guardians, but alas I’m still stuck in the Xbox 360 world, thus I don’t think these items will ever get redeemed. That’s okay to me, because I can’t imagine that game being any good.

One day I should give Halo another chance. Either through Xbox or on PC. I bet those games are really fun in co-op.

END_OF_DOCUMENT_TOKEN_TO_BE_REPLACED

Ever have that feeling where you wake up and find out something surprising? That happened to me a while back as I was combing through my scant emails while watching stuff.

I won a free year of Loot Crate. I’ll admit, I was shocked. I rarely win things. I envied a friend of mine who usually stumbled upon getting free stuff all the time. I don’t even remember what contest I entered to win this, but hey, I’ll happily take free Loot Crate for a year.

For the unaware, Loot Crate is a simple subscription service where every month they send you some geeky goodies based on a theme. It’s usually $13/month, though you can go for longer subscriptions that’ll save money in the long run.

A lot of their crates involve a lot of the pop culture geek ephemera that you’d expect. Figurines, shirts and occasional Good Stuff. I’ve had friends with subscriptions to the service and they seemed to enjoy the things they got on offer.

So simple and mysterious… I wonder what’s inside…

The theme of this month’s was Combat, based on various ways to fight the world. As I only casually followed Loot Crate, before I wrote this post, I didn’t even know the stuff that would be in each monthly crate was based on a theme. This is pretty neat, as it gives me a hint of what’s inside the box. The downside is I might get a Funko Pop, which I’m not a super fan of.

But enough about that. What was in my first monthly Loot Crate? 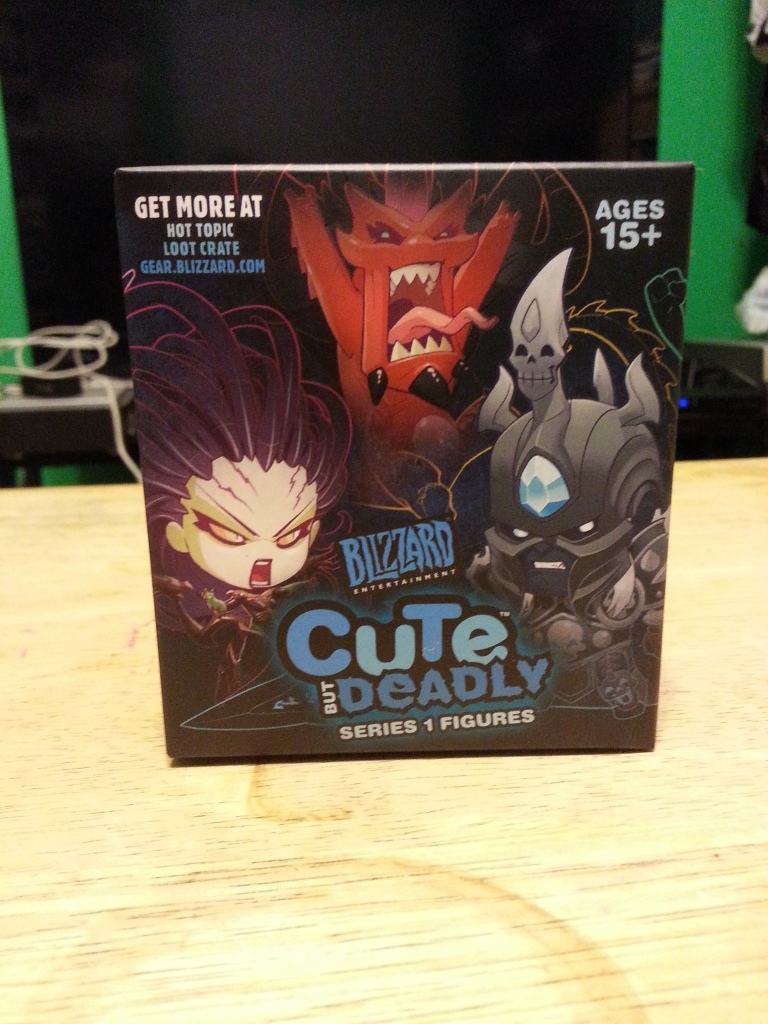 Somehow realizing I could also find these at Hot Topic or Blizzard’s online store killed the sort of uniqueness this item could’ve given.

Ah yes, the wonders of mysterious toys in sealed bags that may or may not have something interesting in them. Blind bags are fascinating as hell to me, mostly in part due to Ashens’ videos on it. While I’m not a cheeky brit with a mangy old brown sofa, I am a bloody yank with a stained TV tray, so let’s go and check these out.

All of these are based on various Blizzard franchises: Starcraft, World of Warcraft, that sort of thing. I’ll admit I don’t follow much in terms of Blizzard games. I’ve dabbled in a demo of Diablo or StarCraft years back, but I never really followed their stuff like Hearthstone or World of Warcraft. But whatever, the franchises don’t matter, it’s mystery of the blind bag that intrigues me. Let’s crack this sucker open.

I guess there is truth in advertising…

Oh wow. This is the rare orange Murloc advertised on the back of the box and in the Loot Crate booklet for the month. I honestly expected to get the more common Arthas or Kerrigan in the set, but this is a treat. He’s tiny enough to fit well on the shelf of my desk without being too much of a bother. He’s also damn cute, so there’s that.

I wish my luck was always this good. If it was, I’d play the lottery.