Back in the mid ’90s, when Sega slowly was losing its competitive edge against veteran Nintendo and newcomer Sony, they were also publishing a fair share of their games on Windows PCs. This isn’t as well known as their other stuff, considering most of them were ports of existing Genesis and Saturn games.

Most of their games was ports of stuff like Comix Zone and Tomcat Alley. But then a certain blue hedgehog burst onto the PC scene, and I don’t mean by strange fan games made in Klik’n’Play….

Sonic & Knuckles Collection was released in 1997, and was the second Sonic game to reach PC, the first being two different ports of Sonic CD. It was smart for Sega to port The Best Sonic Game* to Windows machines, for people like me.

I was strictly a Nintendo kid pretty much until the late ’90s, when I got my first PC, and later getting a Dreamcast in 2000. Because of that, the Genesis is a system that I owned but didn’t really experience properly, thus I never got to play Sonic 3 & Knuckles until this PC release.

…Well, that and the water levels in Sonic 2 scared me so bad that when I got Sonic 3 and got to Hydrocity Zone, I got so scared that I asked to take the game back. Damn you Yukifumi Makino and your scary-as-fuck drowning music!

Nooo don’t send me down there

I have not one, not two, but three copies of this game. The first one I got was part of a Jack in the Box promotion, which had a few other Sega PC games like Sonic 3D Blast and Ecco the Dolphin. The others were a complete-in-box copy and a CD jewel case copy that came in a Sonic three pack with Sonic CD and Sonic R. That’s probably more copies than I need of this game, but hey.

The menu where you choose what game you want to play. Like the “2-PLAY OK” on the side.

There is a slight problem, though. This game was made for 1997-era computers. As I write this, it is 2016, and I’m running Windows 10. What happens when you play the game now? Well, this:

Yeah, the timing’s so fast that even Sonic himself couldn’t play this. There’s two ways to fix this for modern systems: Creating a S3K.INI file and putting it in your Windows folder that locks the framerate (risky but reliable), or download a patch Sega released that fixes that, available at Sonic Retro (safer for those who don’t wanna mess with Notepad and creating weird files.)

Now that we fixed the “gotta go fast” problem, what makes this unique from the Genesis original? Well, besides having Sonic 3, Sonic & Knuckles, plus the lock on, it also features that ridiculous Blue Spheres minigame that appeared when you locked Sonic 1 onto the cart. No Knuckles in Sonic 2 here, sadly.

There is one more thing: The music. While most of the game has most of the iconic tunes, a few of them got mysteriously changed for the PC release. Namely Carnival Night, Ice Cap, and Launch Base, along with a few other incidental tracks. It’s a shame because Ice Cap and Launch Base are some of my favorite tracks from Sonic 3.

There’s two popular theories: The samples used could not be properly recreated on sound cards of the time, and then there’s the Michael Jackson theory. For those who aren’t aware, Jackson was tapped to compose the music for Sonic 3. He dropped out of the project, but the exact reason is unclear – depending on who you ask, it’s been anywhere from him not liking the YM2612 sound chip the Genesis used, to the child molestation scandals that haunted him that year – thus his assistants to the project, which included musicians like Brad Buxer, were credited as composers instead. The reason some suggest the latter is because of royalties, but like the whole Jackson theory, things are unclear. 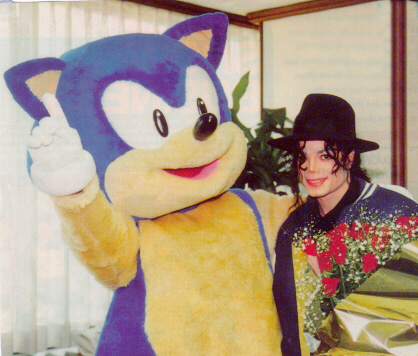 Talk about a strained relationship…

This particular change only applies to this release. All later releases of Sonic 3 & Knuckles, from Sonic Mega Collection, to Sonic’s Ultimate Genesis Collection, still use the original music. Though this might be for logistical reasons, since replacing music in older games is a bit harder than, oh say, changing Spider-Man so he’s pink in later releases of The Revenge of Shinobi. The whole Sonic 3 music thing is an interesting story, since about a dozen people made music for both this and Sonic & Knuckles. Maybe one day we’ll have proper credits for who composed what.

Other than that, the game is fairly the same as the 1994 Genesis classics. Nowadays it’s redundant considering you can play the original version through emulators like Sega Genesis and Mega Drive Classics on Steam, but when it was the mid ’90s and emulation was still in its infancy, this was a suitable substitute.

Honestly, the era when Sega developed and published PC games in the mid-to-late ’90s is woefully undocumented. Outside of a few Sega fan sites, very few know of these games. Makes me want to find some more of these PC releases and see how they’d run on modern machines. At least more people should be talking about them.

Some images and information here courtesy of Sonic Retro.

*-Sonic 3 & Knuckles is The Best Sonic Game and I won’t accept any other answer. Except maybe Sonic CD. But definitely not Sonic 2.