If you’re like me, you probably have a massive backlog. I can’t blame you, Steam sales are the bane of our existences. This means you’ll sometimes buy games and wonder why you got them, like Chrome. I almost wrote something about that but I couldn’t stomach it after two levels.

This is just a small excerpt of some of the games I’ve bought on countless Steam sales and never played or finished.

So let’s see what else I got. Alan Wake is too well-known, writing something about the six Star Wars games I own would be a bit too popular, I don’t think there’s anyone interested in me talking about the Wallace & Gromit Telltale series… 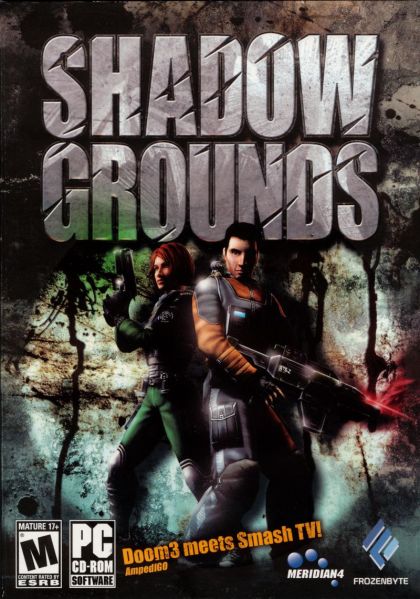 A-ha, here we go. A game from a Finnish developer who’d later be known for the fun Trine series of games: Shadowgrounds.

This game holds a bit of a memory because of how Steam was ten years ago. See, Steam was a different beast back then. There wasn’t much outside support outside of a few indie games, like the wonderful Darwinia and the one-note, forgettable Rag Doll Kung Fu. Frozenbyte’s Shadowgrounds was one of those early adopters of Valve’s content delivery service, though this was during that period where games like these were still sold in physical boxes in stores. Though it would likely be shoved into the bottom of a GameStop bargain bin these days before being thrown out.

(Story spoilers within! If you wish to play it yourself spoiler-free, it’s on Steam for the low price of $6.99, or $12.99 for this and its sequel Shadowgrounds: Survivor!)

Set on the moon Ganymede, you play as engineer William Tyler, who’s sent out on a mission to repair some generators with some colleagues. Until stuff goes wrong. Armed with only a pistol, you fight loads of aliens as you solve the mystery and see what happens. Along the way you meet allies, and try to make sense of this mess.

This a top-down shooter. It reminds me of Valve’s Alien Swarm, though European readers may liken this more to Team17’s Alien Breed series of games. You have a crosshair that aims in the general direction of enemy targets, and it plays fairly straightforward: Shoot the aliens before they attack you and kill you.