A few years ago, I had found out there were gummy candies based off the then hot new property Angry Birds: Space, which I reviewed here. I decided to give them a try and was firmly disappointed how they tasted like gummy bears and not actual fruit snacks. Then I had found out thanks to a store called Rocket Fizz that there were several variants of this dumb candy.

Clearly I’m not gonna try them all, the first box I had was bad enough!

Struggling with what I wanted to write about lately, I decided to hop into a nearby Dollar Tree in Portland. In addition to the rare sight of Pibb Xtra in bottles, I found these two gems:

Because video game candy can spur ideas more than anything else can.

Super Mario 3-Dees gummies and Plants vs. Zombies 2 fruit flavored snacks. Score! Because unhealthy things like candy and soda will always fuel my blog in some way.

I’m gonna review both of them today, in spite of them not having anything to do with one another except both of them are candy. This will be fun.

One of these things is not like the others…

Super Mario 3-Dees have the distinction of being 3D shaped, which I guess means they look more like the real thing and not freaks of nature like most fruit snacks look like. The bag comes with four flavors: Strawberry, Watermelon, Orange and “mixed berries,” with four of the characters from the famed Mario franchise being featured: Mario, Yoshi, Donkey Kong and… Diddy Kong.

They still do the seal of quality?!

I wouldn’t put Diddy Kong as being part of the Mario franchise unless you wanna count his appearances in Super Smash Bros. or Mario Kart. Perhaps Luigi, Peach or even Bowser would’ve been better choices. Oh well, at least this is an official Nintendo licensed product, complete with the Nintendo not-quite-Seal of Quality on the back of the bag.

Each of the four flavors can appear on more than one character, which meant that this bag ended up with a bunch of Diddy Kongs in a variety of flavors, very few Yoshis, and no Marios whatsoever. Oh well, it’s not how they look, but rather how they taste.

They actually taste alright. Drastically better than the Angry Birds ones I had a few years ago, and they’re pretty big for a gummy candy. They even have small stands under the character so they can be stood upright, which is likely the reason they’re called 3-Dees. I’m actually impressed with these, good job “Au’some” brand, wherever you guys are from. 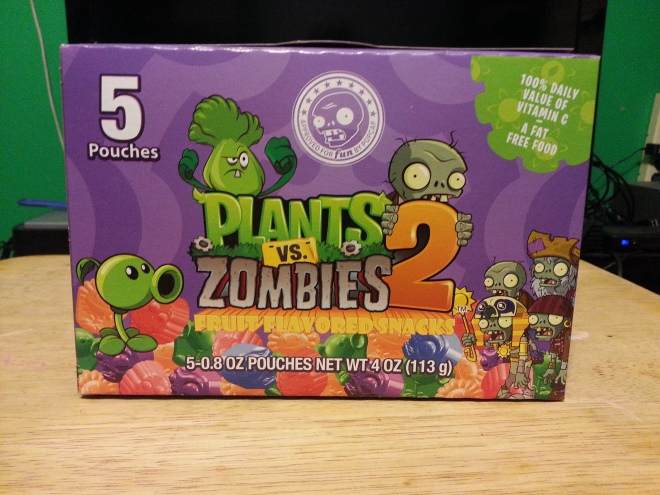 So this is why EA bought PopCap… so they can make stuff like these! Easier to market than military dudes, truly.

Now onto the Plants vs. Zombies 2 fruit snacks. Unlike the Mario gummies, these are actual honest-to-god fruit snacks. Featuring the various zombies on the cover, this was made to advertise the some maligned Plants vs. Zombies 2, full of microtransactions and other gross things people don’t like about mobile free-to-play games. The bright side is these fruit snacks have a 100% daily value of Vitamin C and fat free. They’re “Approved for FUN by Popcap!” which is… rather concerning.

I don’t know how you can have fun with fruit snacks, but PopCap is certainly encouraging you to!

So these come in five small pouches have the various characters in them: The Sunflower, the Peashooter, a generic zombie, and Wall-Nut. I had to look up the last one because my knowledge in Plants vs. Zombies is pretty spotty.

Now these are the kind of fruit snacks that *I* remember.

Naturally since these are fruit snacks, they look less like what they do on the box and look more like malformed shapes. Oh well, I can’t complain. Also, the first bag I opened had like six Peashooters and one of the remaining three, so I got lucky.

As for how they taste, they’re totally fruit snacks. Tried one, tried them all. While I couldn’t pinpoint the flavor of Peashooters, Sunflowers were orange, Zombies were grape, and Wall-Nut was sort of a strawberry flavor. These weren’t bad, but I wouldn’t go out of my way to find them. Especially since they were in a dollar store and probably have been sitting out for a while.

Man, candy based on video games have sure changed. I remember when they used to be in abundance, now I had to find these in a dollar store to review them. They’re not bad for snacks, but then again, I wasn’t expecting anything amazing at a dollar store.

Here’s hoping I can find more of these some day. Despite these things killing my teeth, they’re actually interesting to write about.