Tommy’s Wheel of Misfortune: A strange Wheel of Fortune clone for DOS.

Lately I’ve been on a kick of looking at old DOS game show games. There were a lot of official game show games of the 80s, from the greats like Jeopardy! and Wheel of Fortune to lesser-known classics like Now You See It, Fun House and Remote Control. But what I was really interested in were the game show games made by hobby programmers. 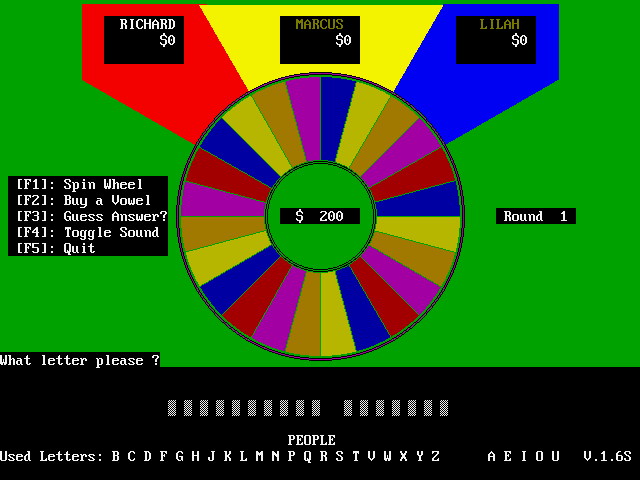 I remember seeing this in a Micro Star shareware compilation disc. I wonder if I still have it…

I was looking for Wheel of Fortune clones, but I could only find two. VGAWHEEL (or EGAWHEEL, I’ve seen both names online) is a no-frills version of Wheel that has probably the prettiest wheel made for DOS. Oh, and it has a cute little theme that plays on the PC speaker. Alas, there isn’t much to say about VGAWHEEL, other than Russell Mueller made a pretty good Wheel clone for DOS.

However, the other one I found is most intriguing. This was made by someone with a rather… silly sense of humor.

Man, this guy even had a BBS line! I wonder if there were aliens on it.

Tommy’s Toys was a garage developer who made games “designed by aliens from outer space.” They made a lot of games throughout the ’80s and ’90s. We’re talking about hundreds of them released over ten years.  Tommy’s Toys pretty much disappeared by the time Windows became super popular, and the designer stopped making games to write books. At least that’s what Mobygames tells me, anyway. 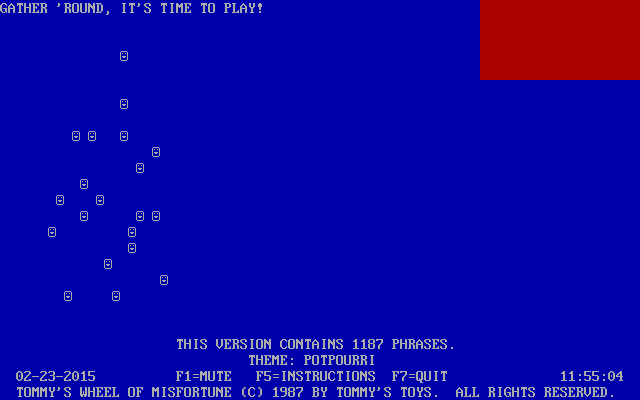 You know it’s a DOS classic when you see that smiley face in there.

The reason I mention this developer is because they ended up making their own spin on Wheel of Fortune. Made during the peak of “I’m a Wheel Watcher” mania, Tommy’s Toys brings from “outer space” clone called Tommy’s Wheel of Misfortune. So let’s dive into this alien-made Wheel of Fortune clone, shall we?

Off the bat, there are a few changes from the classic game show. You can have anywhere from 2-6 players, more than the three from the actual show. The manual states you can play against the computer but I’m not sure how. After that, it’s standard Wheel of Fortune, except with a few twists. 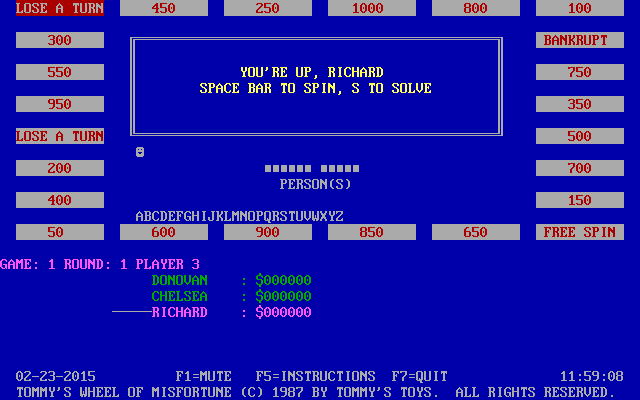 Now that I think about it, this reminds me more of another game show…

You can see that the Wheel is not a fixed pattern. It has the common Bankrupt, Lose a Turn and Free Spin spaces that you’d associate with Wheel of Fortune, but they’re shuffled around the board at random each round, making the wheel more devious at times.In a sense, it feels like a hybrid between Wheel of Fortune and the other notable luck-driven game show, Press Your Luck. Thankfully there’s no sign of the whammies anywhere.

Second, you can turn off the used letter board if you want a real challenge. By default it’s left on, because according to Tommy, “MOST PLAYERS CHEAT.” Third, calling a wrong letter actually penalizes you more than losing your turn, as the amount of the space you landed on is taken away from your score. This makes it difficult later on, especially if you want to buy vowels. 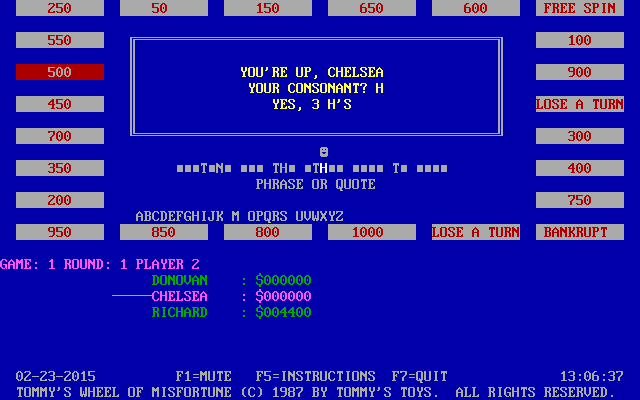 That smiley face’s no Vanna White, but it’ll do.

Other than that, the game is similar to the Wheel people know and love. There’s several rounds of play, you can turn on the speed round at any time, you can change puzzles if you don’t like the current one, and if you hate Tommy’s deranged sadistic Wheel of Fortune, you can change it to resemble the original TV show by typing in a command in DOS before starting the game. 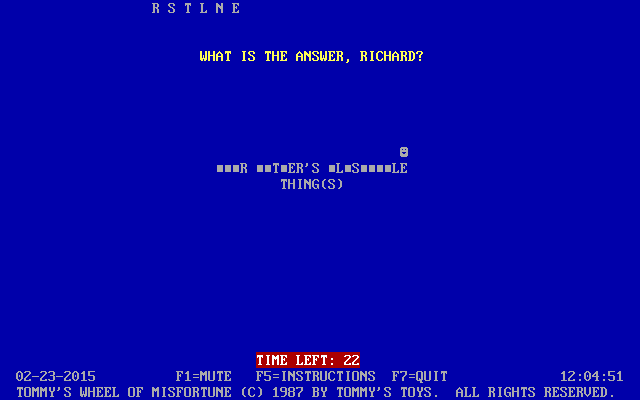 The only other major difference is the bonus round. Tommy’s Wheel of Misfortune goes by the original bonus round rules of five consonants and one vowel. Turning on Wheel of Fortune mode makes it resemble the current bonus round, where RSTLNE are given for free and you ask for 3 additional consonants and one vowel. The original way makes certain puzzles really difficult unless you go for RSTLNE. If you win, $25,000 in fake dollars is yours.

There are about 1,100 puzzles in the version of Tommy’s Wheel of Misfortune that I have, but if you thought that wasn’t enough puzzles, for the low low price of $24.95, you can get an additional 15,000 puzzles based on various subjects, including the King James Bible, as well as a puzzle maker. $25 sounds like a lot, but considering the price of DOS games from that era, I guess it wasn’t too far-fetched.

But wait, there’s more! If you thought Wheel of Misfortune wasn’t crazy enough, you could try Tommy’s Wheel of Confusion! 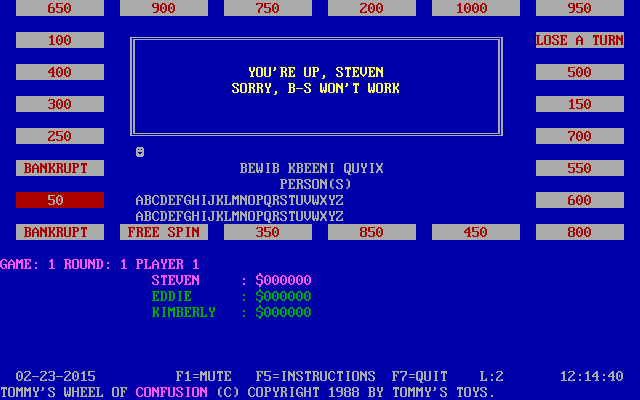 I don’t care what the game says, B-S will always work!

Wheel of Confusion is similar to Wheel of Misfortune, except truly more sadistic. Instead of blank spaces, there are bogus letters in the puzzle. Your goal is to match the fake letter with the real letter, similar to cryptograms. It adds another tough layer to the already complicated format Wheel of Misfortune puts, and it’s not really that fun.

There’s another mode in Wheel of Confusion where you choose the letter that’s on the board and guess what letter it really is. That, combined with the cryptogram system, makes it the hardest Wheel of Fortune game around.

I tried playing a game of Wheel of Confusion and the first round took me several minutes to actually play compared to most other Wheel of Fortune games. I eventually figured out the puzzle, and it’s clear Tommy’s Toys dives into the weird obscura and trivia knowledge that even Jeopardy! wouldn’t touch nowadays, like who Roger Brooke Taney was. To be blunt, this is not a fun game unless you just like racking your brain in the worst ways. 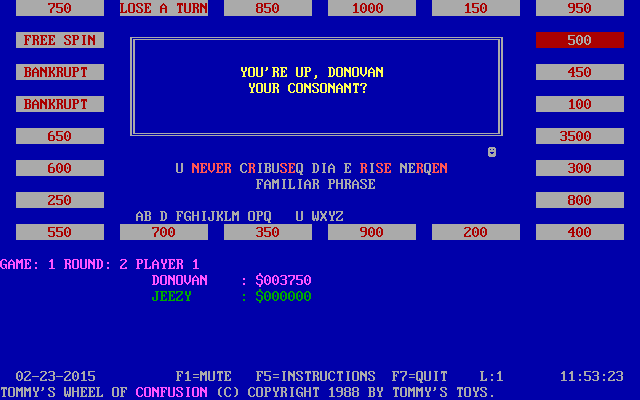 Seriously, this game is confusing as hell. Hope you love racking your brain over these dumb puzzles!

Tommy’s Wheel of Misfortune and Tommy’s Wheel of Confusion are fascinating little DOS games. Fairly simple, nothing complex, but interesting to see someone’s unique twist on the classic game show, compared to EGAWHEEL which tried to emulate the show without having to pay $30-40 for the official ones GameTek were selling around the same time.

If you wanna play these, you can freely do so as they’re abandonware. I won’t link to any abandonware sites to avoid getting in trouble, but if you’re familiar with the internet it’s probably easy to find. Provided you didn’t find this post first, I don’t really share abandonware stuff here.

One of these days, I’m gonna tackle more DOS trivia and game show games, because there were a lot of them and some of them were interesting to look at. Like a trivia game by a certain Apogee Software… 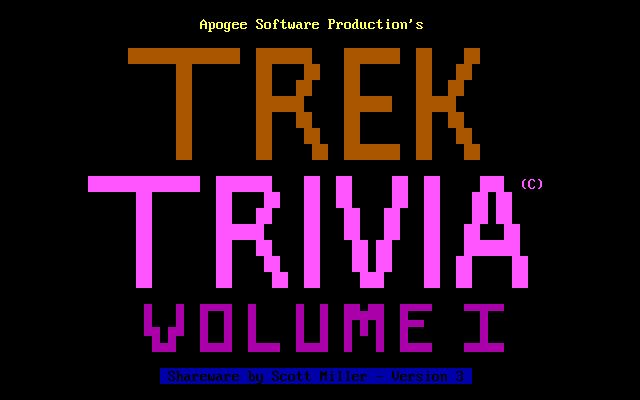 Hey, how come 3D Realms has forgotten about this? I want an Apogee collection with this kind of stuff!

I'm the creator and writer of You Found a Secret Area. Fascinated by obscure pop culture and wanting a place to write about curated stuff, I created the blog in 2012 and have been running it ever since. Also on Twitter. (Pronouns: she/her, they/them)