I am not a fan of Kiss. I only know a few of their songs, mostly because they appeared in Rock Band. I’m aware of Gene Simmons’ mastery of marketing the band, complete with corny ’70s live-action specials, their shift to hair metal in the 80s, and of course, the infamous Kiss Kasket.

They have a couple good songs, at least. “Love Gun,” “I Was Made for Lovin’ You,” even “Strutter” is pretty solid. Kiss is a band I can appreciate and respect, but I don’t really care for them.

The late ’90s was the time for a Kiss comeback: The original line-up got back together and released an album in 1998 called Psycho Circus. With that title, and probably with a pinch of Gene Simmons’ marketing mastery, it eventually lead to a comic book series written by Spawn creator Todd MacFarlane, and of course, a video game. Prepare for the Nightmare Child. 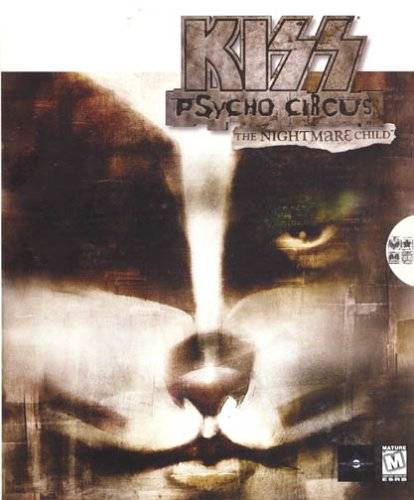 This is one of four different covers. I guess they hoped people would buy all four in a way to recuperate the development cost?

Kiss Psycho Circus: The Nightmare Child is a video game adaption of the Psycho Circus comic book series by Image Comics and Todd MacFarlane Productions. The comic involved the band members becoming supernatural beings and saving the universe as part of the silly team moniker Four-Who-Are-One. The video game borrows elements from the comic, but has a wholly different story.

This was released on PC and Dreamcast in 2000, not long after games like Quake III Arena and Unreal Tournament were getting big. Though this being released on the Dreamcast and not the then-forthcoming PlayStation 2 is rather baffling, but maybe it’s for the best.

Instead of playing as members of Kiss, you play as members of a Kiss tribute band who get teleported to a special world ran by this gypsy named Madame Raven. She tells you about this big bad called “The Nightmare Child,” one that will destroy the world, and your band are the chosen ones to stop them.

I hope you love mystical dialog that barely makes any sense!

Separated by the Hall of Mirrors, each band member goes through each world as they grab each of the six pieces that form the respective Elder to stop the mythical Nightmare Child. Admittedly, the story is rather nonsensical even in-game, I had to resort to the manual to understand this bizarre-ass story.

I can say with authority that this story is so god damn ridiculous that it’s not worth looking further into. Then again, with this being co-opted by a band known for wearing silly outfits and the guy who created freakin’ Spawn, I’m not expecting System Shock 2 levels of storytelling here.

This game was developed by Third Law Interactive, founded by one of the original members of the Daikatana development team during its first year or so when it was under the Quake engine, so already we’re off to a shaky start. They didn’t do a whole lot of notable stuff outside of this game, my brief internet search found out they worked on an Aliens vs. Predator 2 expansion and added stuff to the Game of the Year edition of No One Lives Forever.

You may have noticed that’s all Monolith/Lithtech stuff. Unsurprisingly, this game runs on Lithtech 1.5, which is an absolute pain in the ass to get working on modern devices without needing an elder god and maybe dgVoodoo2. Worst off, that this is one of those games that has the pesky disc check, and no patch or update is out to turn it off. A shame, really.

But let’s get to the meat of Kiss Psycho Circus. In the game, you choose one of the four supernatural characters and go through a set of levels, getting weapons, jumping on platforms, activating switches and killing enemies in your wake. Through the levels, you’re looking for the items make your character part of the Elder, like boots, shoulder pads, and finally the iconic Kiss masks.

This guy’s ready to pull the trigger on his gun. His Love Gun, that is.

Each episode ends with you heading to the titular Psycho Circus to fight the boss of the area, who holds the mask of the elder. After that, you’re jumped into the next episode in a different location to do it all over again. Lather, rinse, repeat for the other three worlds before fighting a final boss at the end. Fairly simple old-school shooter fare.

One of the levels started in a library nearby a cathedral, but suddenly I walked into a giant bookshelf without explanation. This happens a lot.

Since the last time I played this game was about ten years ago, I had to replay it to remember some things. If you thought the story was ridiculous, the rest of the game is just as insane. Literal fat ladies throwing bile bombs, floating enemies that shoot toxic gas at you, a one-armed discus thrower, the works. That combined with roaming around various places like generic bars and roman-looking coliseums, to roaming around a library while shrunk. The levels don’t make sense, basically.

The weapons are even stranger: The melee weapons are simple enough, but then there’s stuff like a rocket launcher that shoots an explosive shockwave, a metal gauntlet that acts like a shotgun, even a magical railgun whip that doubles as a grappling hook. Some of these weapons ideas seem like rejected ideas from Daikatana. It’s as if John Romero told these guys that these weapons look too weird, and that’s funny considering Daikatana has more guns that do damage to you more than the enemies.

This game throws a lot of enemies at you, and I mean a lot. Sometimes hallways can be flooded by dozens or more of the same enemy, and it’s further exacerbated by enemy spawners you must destroy otherwise it makes it difficult to progress. Several times there were lots of dudes in an area with the intent to kill them all, usually in cramped, closed-off spaces, overwhelming me in the process.

I don’t think I understand the lore of this. Did the Four-Who-Are-One have metal shotguns in the comics?

Kiss Psycho Circus fits perfectly in that kind of FPS subgenre that Serious Sam and Painkiller were later known for: just throwing loads of enemies in a room and expecting you to deal with them all. I used to call these “enemy hell” FPSes as an homage to the “bullet hell” shoot-em-up genre, but someone suggested to me a better name: the “slaughter FPS,” as a dedication to Doom‘s slaughter maps.

Outside of the masks and various jukeboxes playing Kiss tunes, this game barely has anything to do with Kiss. Which is good, it means you don’t need to be a diehard fan to understand what the hell’s going on. That works perfectly for me.

Besides all that, it’s a pretty average, difficult FPS. There really isn’t much else to say about this, as it’s based on a licensed property that nobody really remembers and barely is related to Kiss as a band. It’s one of those weird anomalies in the band’s history, and I’m amazed it even exists.

I still question why this exists. Was the Psycho Circus comic book a hot property? Did someone think Kiss fans were also fans of Quake II? Was this meant to be based off something else and was forced to be a licensed title at the last minute? There’s so many questions and not enough answers. I’d love to hear from someone who worked on this game just to get the full story.

I don’t know anyone who’d frame pictures of Kiss on my wall, and I don’t really want to.

After Psycho Circus, there weren’t a lot of other Kiss games. There’s a pinball game for the PlayStation that I heard was kind of average. Naturally like every other band they’ve licensed their songs in a litany of movies, TV shows and video games, including DLC for both Guitar Hero and Rock Band. But the odds of us getting a Kiss Psycho Circus 2 is extremely unlikely, and judging by this game, we should be glad.

As for Third Law Interactive, they didn’t make many games after this. However, they did do a bunch of budget titles under their 3LV Games banner, such as Arthur’s Quest: Battle for the Kingdom and… Elite Forces WWII: Iwo Jima. In a sense, I’ve now written about two games from this company. I mean, it’s significantly better than what I played of Iwo Jima, but that’s not saying much.

While the studio no longer exists, a handful of people at the studio found greener pastures, such as working at id Software on Doom 3, Rage and many others. Hell, the lead designer for Kiss Psycho Circus was Master Levels for Doom II veteran Sverre Andre Kvernmo. Even a shooter based on one of the most glam rock bands has a little Doom DNA in it, which is kinda neat, actually.

Despite my disinterest, this is a game worth checking out just on how… bizarre it all is. The only way to get this is to buy a second-hand copy online, of which there’s several versions and a collector’s edition. Though, knowing how things are going, we might get a re-release of this by Night Dive Studios some day. Anything is possible, really.

Updated 6/1/2020 for paragraph adjustments and new information since the original post’s publication.